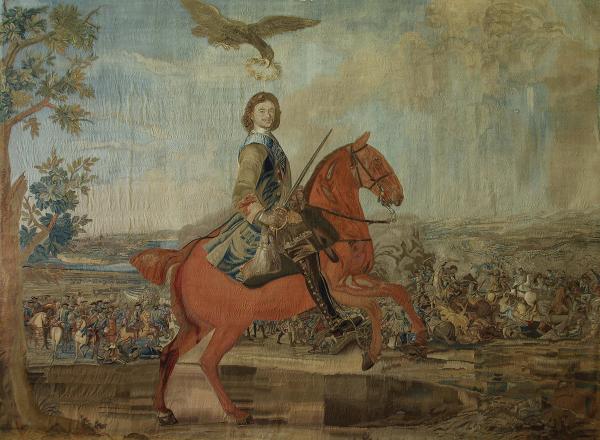 In the centre of the tapestry is the equestrian portrait of Peter I, a convincing monumental image of the commander. The figure of the emperor on the rampant bay horse is spectacularly depicted against the background of the battle. The artist and the makers of the tapestry managed to find the necessary degree of generalization and achieve the monumentality necessary for this kind of work, creating an expressive artistic image through the means of carpet making.

Initially, the tapestry was surrounded by a wide frame with the images of the coats of arms of Russian towns. It is difficult to say, when and under what circumstances the tapestry lost this spectacular frame. Until 1863 the St. Petersburg furniture manufacturer Karl Tur owned the carpet. Then until 1912 the carpet decorated the rooms of the Petrovsky palace on Petrovsky island.

The fragments of the frame are currently kept in the State Russian Museum and the Historical Museum in Moscow.

The tapestry is an example of the most interesting monumental Russian decorative art of the 18th century thanks to the mastery of its performance.