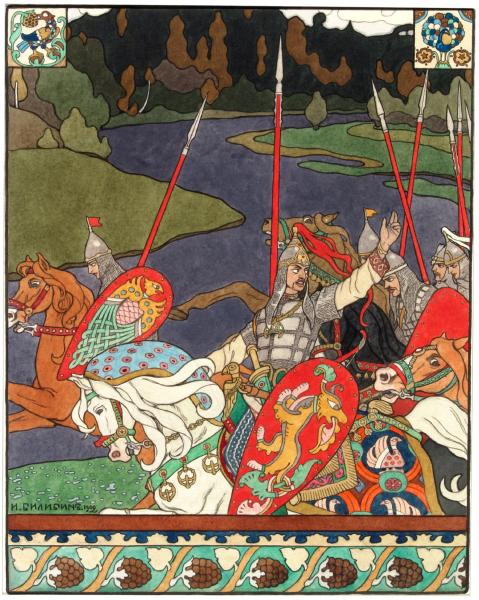 Version of illustration to the Russian traditional heroic poem Volga.
Ivan Bilibin’s illustrations to Russian fairy tales and traditional heroic poems demonstrate his artistic talent and knowledge of Old Russian legends. By the time the first illustrations for the traditional heroic poem Volga appeared in 1902, Bilibin already had experience working in book illustration. In the autumn of 1899, he was commissioned by the Organization for the Preparation of State Papers to create a cycle of six Russian folk tales. Volga tells the story of a brave knight who sets out on a journey to India. The poem was published in the form of a large-sized jotter by Golicke & Wilborg in 1904. Bilibin designed the cover, title-page, illumination, colophon, decorations and five page-length illustrations. This work from the Russian Museum’s collection is a variant of one of these illustrations.
«Виртуальный Русский музей» в социальных сетях: