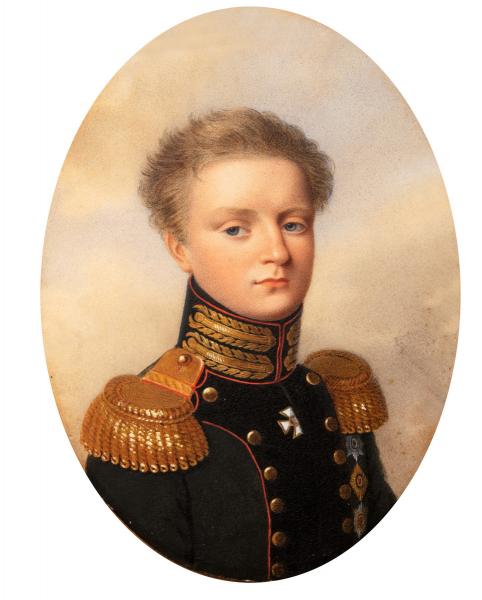 Grand Duke Michael (Mikhail) Pavlovich (1798–1849) was the fourth son of Emperor Paul I and his second wife, Empress Marie Feodorovna. Since the day of his birth, he held the rank of General of the Branch, but actually joined the management of the Artillery Department in 1819. Beginning in 1831, he was the main chief of the Page Corps and all of the ground Cadet Corps. He fought in the Russo-Turkish War of 1828–1829 and in the Polish Campaign of 1830–1831. He facilitated a series of transformations in the army. In 1844, he became the commander of the Guards and Grenadier Corps. In 1824 he married his cousin Princess Friederike Charlotte Marie of Württemberg (Elena Pavlovna after her conversion to Orthodoxy). In George Dawe’s portrait, he is depicted in the uniform of the Guard Artillery with the Order of St Andrew (star). The Mikhailovsky Palace in St Petersburg, which today is occupied by the Russian Museum, was named after the Grand Duke.