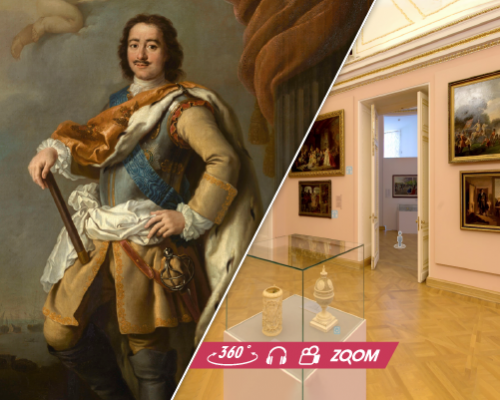 A virtual tour of the exhibition, which took place at Mikhailovsky Castle from June 9 to September 26, 2022. The virtual tour allows you to see how the image of Peter and the events related to his biography were embodied in Russian fine art from the end of the XVIII to the beginning of the XX centuries. The exhibition includes about 150 works of painting, graphics, sculpture, numismatics, decorative, applied and folk art from the collection of the Russian Museum, the Tretyakov Gallery, the Peterhof Museum-Reserve, the State Historical Museum and private collections. The virtual tour allows you to travel through the five halls of the exhibition, to examine in detail and get additional information about each of the exhibits, among which a significant part is occupied by authentic masterpieces of Russian art. The works are accompanied by annotations and short biographies of artists prepared by the staff of the scientific part of the Russian Museum. Audio guides have been added to the most significant works.

Dedicated to the 350th anniversary of the birth of Peter the Great, the exhibition was a tribute to the founder of the Russian Empire, who significantly strengthened Russia's position in the international arena.

The image of Peter and his deeds were addressed by outstanding Russian painters and graphic artists Ivan Aivazovsky and Alexey Venetsianov, Peter Drozhdin and Vasily Shebuyev, Alexander Bryullov and Peter Basin, Alexander Kotsebu and Grigory Chernetsov, Ilya Repin and Nikolai Ge, Vasily Surikov and Valentin Serov, Alexander Benois and Dmitry Kardovsky, sculptors Marie Anne Collot, Mark Antokolsky, Leopold Bernstam, Boris Mikeshin and Leonid Sherwood. The works of these authors and many others, as well as about 30 medals, the creation of which in Russia began in Peter's time, can now be seen united in one exhibition space.

During the tour, you can learn about the concept of the exhibition from its curator, head of the Department of painting of the XVIII ‒ I half of the XIX century, Grigory Goldovsky and see a tour of the exhibition, which is conducted by a senior researcher of the department Lada Vikhoreva.

The virtual tour is prepared in Russian and English, which will allow you to get to know the era of Peter the Great better not only for residents of Russia, but also for other countries. 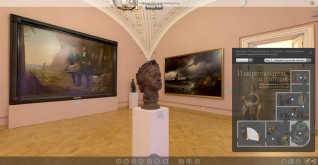