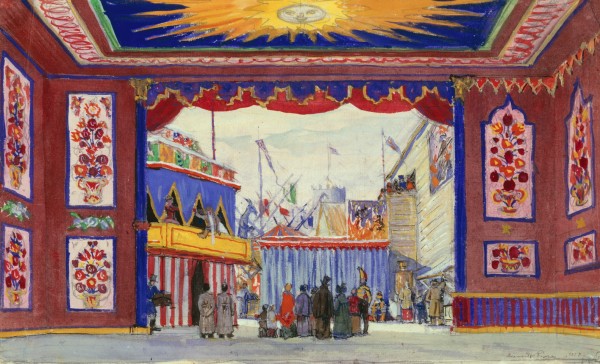 Set design for Scene I

Petrouchka was created jointly by Alexander Benois, the composer Igor Stravinsky and the choreographer Michel Fokine for Sergei Diaghilev’s third Saison Russe in Paris in 1911. In 1920, Petrouchka was staged at the Mariinsky Theatre, based on revived designs of 1917–1918. The stage sets consisted of a portal and four interchanging tableaux inbetween. The first and final tableaux depict the merry shrovetide festivities on a snow-covered square in St Petersburg of the 1830s–1840s. As Benois wrote, “I was ... tempted by the idea of depicting the Butter Week Fair ...the dear balagani [fairground booths] which were the delight of my childhood.” When working on the costumes for Petrouchka, Benois closely studied historical and genre material — folk toys, Russian popular prints, lithographed albums and fashion journals of the 19th century. The plot of the ballet is the rivalry of Pétrouchka, “a grotesque, half-human being”, and Blackamoor for the attention of the Ballerina. Benois lends the hero of his design the movement, gesture and mimics of the future performer, Vaslav Nijinsky, who succeeded, in Benois’ words, in “expressing Pétrouchka’s pitiful oppression and hopeless efforts to achieve personal dignity, without ever ceasing to be a puppet.”