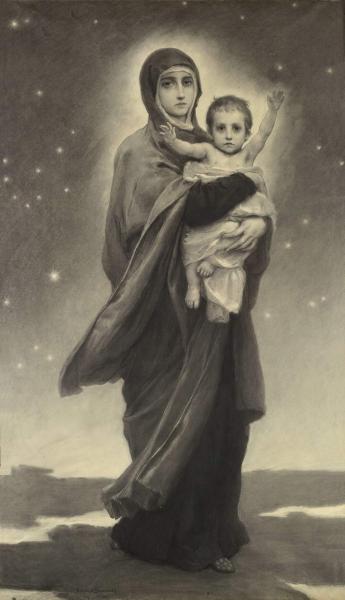 Our Lady with the Holy Child

This is a study for a fresco in St. Volodymyr’s Cathedral in Kiev.. 1887

The author had been working on the mural paintings in St. Volodymyr’s Cathedral in Kiev from 1885 to 1896. This was his most prominent monumental and decorative piece that the author himself considered his life work. During his preparation for fresco painting Vasnetsov studied early Christian art in Italy, viewed mosaics and murals in the Kiev Cathedral of St. Sofia and frescos in St. Cyril’s and St. Michael’s Monasteries in Kiev. He also learned a lot about the ancient Russian artistic traditions – monuments of Novgorod, Moscow, Rostov, and Yaroslavl architectural schools, icons of the Old Believers in Moscow, book miniatures dated back to the ancient times, and folk art.

The painter created 15 compositions and depicted 30 figures on the total area of 4 thousand square meters. The image of Our Lady was painted after his wife holding his son. The child looks as if it sees a beautiful spring garden and spreads its hands towards it in an excited gesture. It took Vasnetsov around two years to create the image of the Holy Mother that brings her Son to the sinful world… Her big eyes full of grief and love look at the viewer soothingly, and her pale face lit with inner light is heavenly beautiful. Vasnetsov turned a traditional image of Our Lady into something new and unique, and this type of image has been called “Vasnetsov’s Mother of God” ever since. It is said that after the work was finished the artist exclaimed: “I’ve lit a candle for our Lord!”