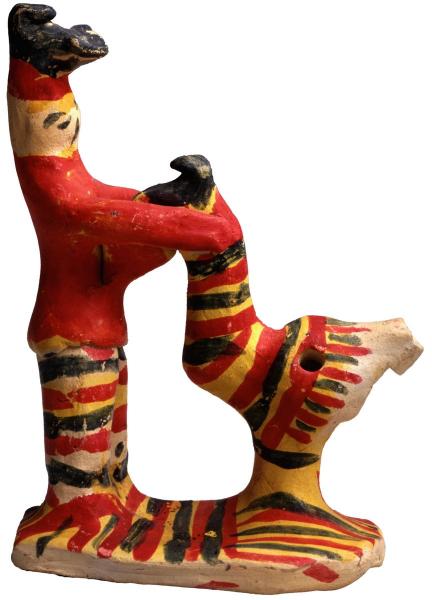 As the legend says, an old man Filimon once found deposits of high-grade clay. It was him, who founded the pottery and the clay toy tradition in the village of Filimonovo, Odoyevsky district of the Tula region. However, the pottery has almost stopped over the past half-century, but the clay toys have brought the world-wide fame to the craft and they still exist at present.

The significant features of modeling the Filimonovo toys developed largely due to the properties of the local clay - a greasy "sinika", which cracked during the drying of figurines, that is why artists had to repeatedly press them and "pull them up". It caused the elongated proportions of Filimonovo toys. The traditional images of ladies, horsemen, animals and birds were supplemented by unique local compositions: soldiers, standing to attention, milkmaids, couples on the couch, feasts. The compositions “Soldier Feeding a Hen”, “Bear Looking in the Mirror” exist only in Filimonovo.

The modeling of toys is emphasized by the painting, which is also original: cross strips are bicolour and faded in earlier toys. But in the toys of 1960-1990s the bright combinations of green, yellow, red-crimson and blue-violet paints appeared.

Aniline paints mixed with eggs are applied directly over the pinkish-yellowish colour of clay after glazing. All of the toys are whistles, although in many cases this is only an external tribute to the tradition.