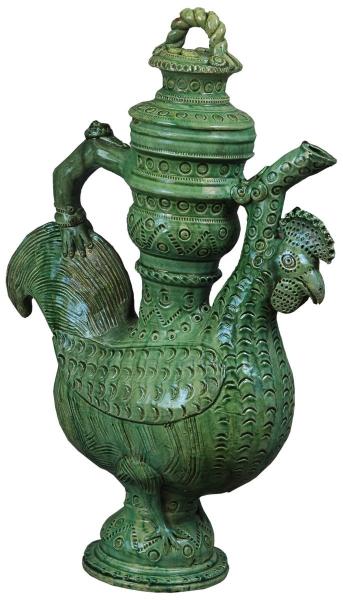 The Cock. A Vessel

In the last third of the 19th century the town of Skopin in the Ryazan province stood out from many other local pottery centres. There, along with the everyday crockery, the figurative and other vessels were designed as sculptures. The complex shapes were made piece by piece and then united. Among them there are disc-shaped vessels for kvass (a traditional Russian beverage made of rye bread) and kumgany vessels (jugs for water with a narrow neck, a spout, handle and a lid), in the form of a bear, fish, lion, two headed eagle, cock, hen, parrot and monkey. The craftsmen made figures of Polkan (a kind of Centaur, a character from Russian folklore - the Story of Prince Bova, sometimes depicted as a dog with a head of a man with a stick) and the fierce bird Skopa that by legend gave the name to the city. The decorative patterns are put on the figures to imitate feathers of birds and fur of animals. The spotted pattern of the bright glazes used in the mixture of different paints became the feature of the local design.