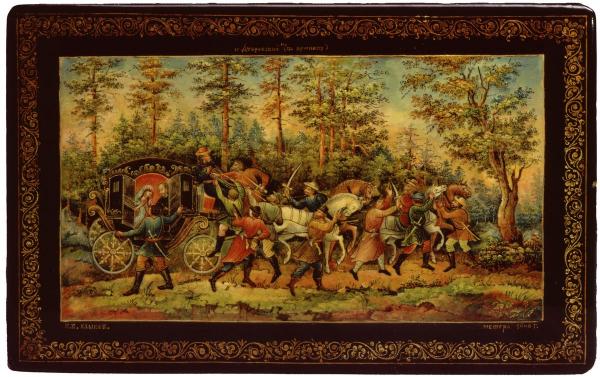 Since the 14th century the Epiphany Sloboda of Mstera, Vyaznikovsky district in the Vladimir region had been  ne of many Russian centres of icon painting.  Mstera icon painters, who knew many old styles of icon painting were famous throughout the country. They followed the masters of the Stroganov school of icon painting which characterised by the  miniature scenes and many details. At the beginning of the 20th century icon paining faced a crisis because of the invention of chromolithography. The icon painters couldn’t meet the competition with the mechanised production of printed icons. Mstera icon painters were eager to find a new path in art after 1917. They tried themselves in the wall rugs’ oil painting on the canvas, wooden objects. In 1931 the masters turned to the lacquer miniature on papier-mache. The founders of a new art in the Mstera were hereditary icon painters A. Bryagin, A. Kotyagin, N. Klykov and I. Morozov.

One of the Klykov’s works is the casket "Dubrovsky". The subject of the painting is based on the story of the great Russian writer Alexander Pushkin. In contrast to the images of Palekh artists, the characters of  Klykov are real people acting in a specific situation. But there is a degree of conventionality and generalisation that is essential in the lacquered miniature. There is a great role of coloring, built on the combinations of plane and pure colors, with the help of which Klykov "models" the characters’ figures, emphasizing their volume with glare and not with a chiaroscuro.