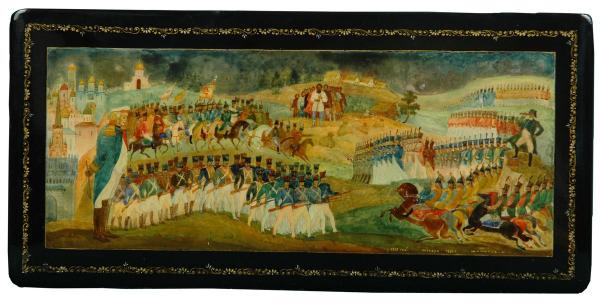 The box of Mstyora craftsmen is dedicated to the Patriotic War of 1812, which ended with the almost complete destruction of the Napoleonic army and the liberation of the territory of Russia.

In the foreground on the left, there is a figure of the commander of the Russian army, Field Marshal Mikhail Kutuzov. On the right on a hill, there is Napoleon.

A tiered composition, a monochrome colour, a characteristic pattern in addition to painting with tempera colours were taken from the local icon painting. The craftsmen place any action against the background of the landscape, sometimes showing surroundings of Mstyora, that is a feature of Mstyora craft. The compositions are framed by an ornamental border, which makes the miniature looks like a painting.