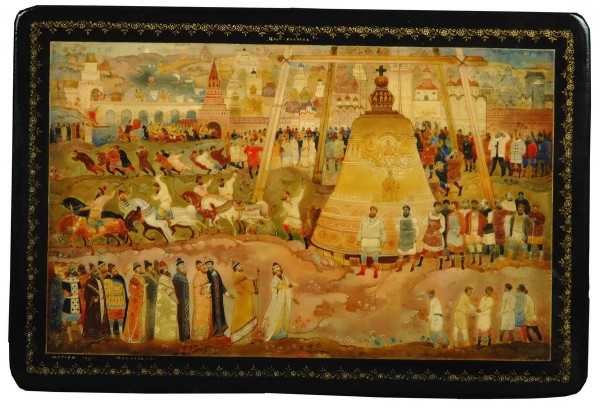 "The Tsar Bell". A Casket

The 1960s were marked by a fundamentally new stage in the art of Mstyora, which was expressed in the desire of artists to expand the range of subjects and images and to renew the means of expressiveness. There was also a great interest in the historical theme. It was that theme that was interpreted in his own way by L. Fomichev.

The miniature the “Tsar Bell” features both his individual style and common trends in the Mstyora miniature of the 1960s. The artist depicts crowds of people in action as if he looks at it from a bird’s-eyed view.  L. Fomichev uses a tiered principle of making a composition for this purpose. Groups of people move in different directions and at different levels, this creates a sensation of the masses swaying to the ringing of the bell.

Against the light background, multicoloured suits of churchmen and boyars, on the one hand, and simple, but sonorous colours of the peasants' clothes, on the other, create a surface sparkling with precious paints. The spots of blue supplement the overall golden tone of the picture. There is closeness to icon painting in the colour and accentuated silhouettes of L. Fomichev's works. In his works, one can trace as well the features of the ancient Russian book miniature.