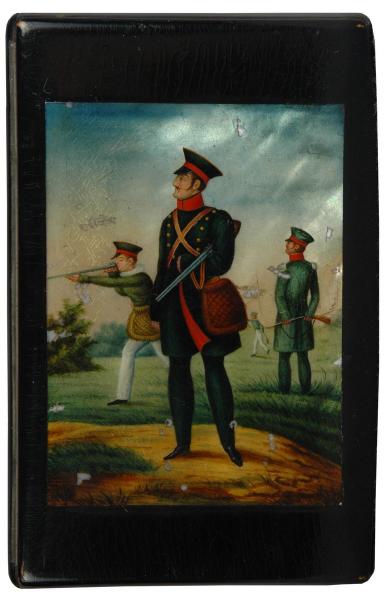 The snuffbox “Nikolay Pavlovich on Hunt”

At the very end of the 18th century the merchant Pavel Korobov founded a papier mâché factory in the small village Danilkovo in Moscow region (suburban Moscow village). Korobov’s son in law Piotr Lukutin, who inherited the factory in 1818, and his descendants improved the manufacture and created a new craft of lacquer miniature painting during the 19th – early 20th centuries.

From a tightly compressed paper (papier mâché) fashionable at that time and varied in form snuffboxes, caskets, boxes, cigarette, eyeglass and stamp cases, purses were made.

Different in form, fashionable at that time boxes, snuffboxes, caskets, cigarette, eyeglass and stamp cases, purses were made from a tightly compressed paper (papier mâché).

They were covered with a lacquer on a black background, which then were painted in oil. As the originals for these boxes the paintings and graphics of Russian and foreign artists were used. Having in front of them a real painting, the masters simplified the copied pattern, changed the composition, limited the number of characters, avoided certain details and decorated the box so that the painting was one with it, harmonizing with its shape and proportions. Sometimes the lacquered surface was encrusted with mother-of-pearl and foil or gold leaves were laid. Landscapes, portraits, views of cities, scenes from the people’s life, ornamental compositions were depicted.