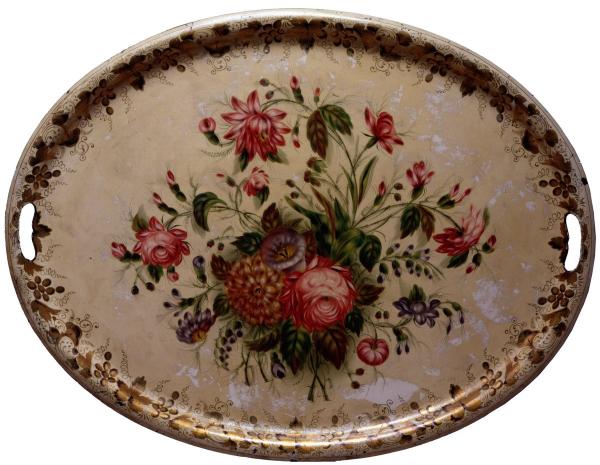 At the beginning of the 19th century, the merchant Philip Vishnyakov opened a papier- mâché workshop in Zhostovo. At that time, he did not suspect that he founded a new craft, which was destined to become one of the unique centres of Russian folk culture.

The first trays were made of papier-mâché, as well as boxes and snuffboxes, stamp boxes and caskets. In the 1830s, the trays in Zhostovo became to be made of metal, following the example of Nizhny Tagil masters. A unique system of decorative painting on trays had formed to the 1880s. It included multi-layer painting techniques on coloured and metallized backgrounds, as well as encrustation with mother of pearl. Various forms of trays were decorated with floral compositions created in oil paints. The production of trays in Zhostovo reached its peak in the last third of the 19th century.

The vivid example of this is a tray with a bouquet of flowers on a white background. It clearly shows the stylistic features of the Zhostovo art at that time, the unity of form and painting, which is characteristic of the best works of the craft. On a white background, there is  a bouquet of roses, bindweeds, dahlias, wrapped in leaves and weeds that were typical for the trays of that time.