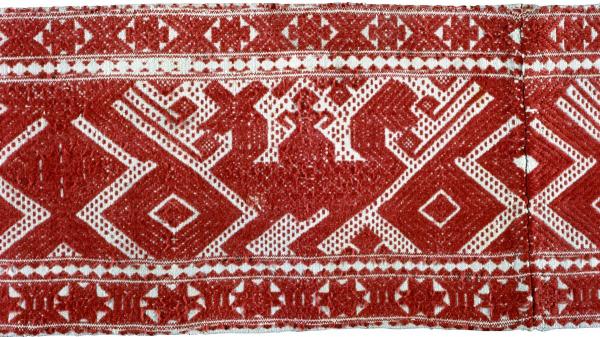 A Piece of a Shirt’s Hem

On the part of the hem of the 19th century shirt we see an unusual composition: images of horses and some fantastic animals resembling the outlines of embroidered snow leopards with female figures standing on their backs. They are symmetrically located on the sides of a complex rhombic motif. One cannot help seeing that there are ancient motifs.

The geometrical patterns provide fairy-tale or real images: a strong horse with a proudly arched neck and pointed ears, a terrible mighty snow leopard with open mouth, a small, beautiful female figure. And even a large rhombic motif, placed between them, on closer examination is similar to the image of a giant man holding reins of horses.