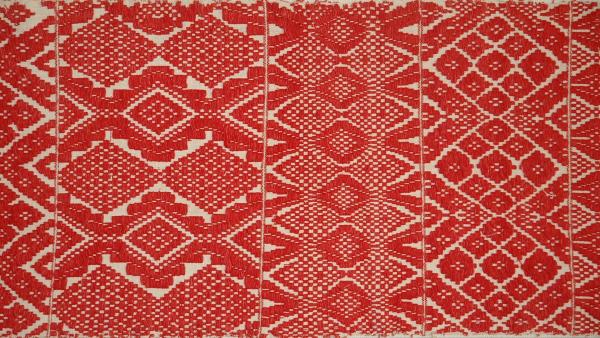 The Сholmogory County, The Arkhangelsk Province. End of the 19th century

Fabrics with pattern adorned a wide range of things, household purpose of which largely determined the principles of their decorative design. Particularly interesting decoration can be seen on festive northern towels that can be distinguished from simple "wipers" by richly-tipped long ends that sometimes occupy the greater half of the cloth.

On the towel of the end of the 19th century from the former Kholmogory county of the Arkhangelsk province, the ends with a red pattern are woven so long that they almost do not leave a smooth linen middle. The pattern of each end consists of eight horizontal stripes of different widths. They alternate, demonstrating various variants of a rhombic ornament. The diamonds are stretched into a simple chain, and then lined up into a large intricate motif. But each composition has its own unique individual appearance. The combination of only two colours - red and white - makes this work rigorous and expressive.