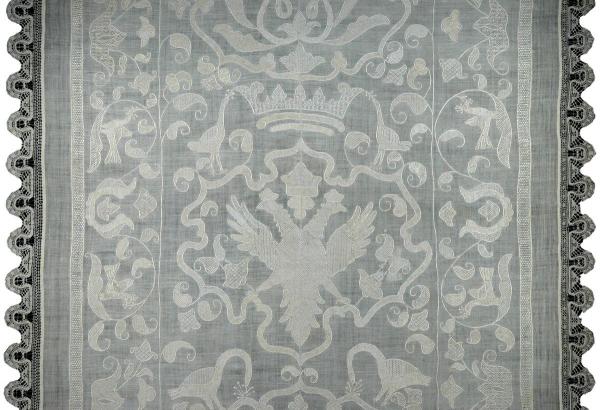 A unique tablecloth is typical for the art of the 17th century. Its long narrow cloth is embroidered with an ornament that reveals a wide centre and a border trimmed from all sides by a woven lace edge. There are images of Sirin birds in seven figured medallions; and a large flower is under the crown. Among the curls of plants, birds fluttering and pecking berries, long-tailed peahen birds, swans, Sirins and swimming fish are depicted. The features of time in this work are manifested in a lush pattern that densely covers the whole field of cloth; in the motifs of the ornament, where dominate the images typical for Ancient Rus; in the dynamic character of the linear drawing, conveying baroque forms of the 17th century; in excellent skill of creation. The tablecloth is embroidered by gold sewing techniques, which came into folk art along with other culture traditions of Ancient Rus. Their geometric fine-grained structure and striking variety of the pattern give the white sewing on a white thin canvas a thick texture and a rich light-and-shadow game.