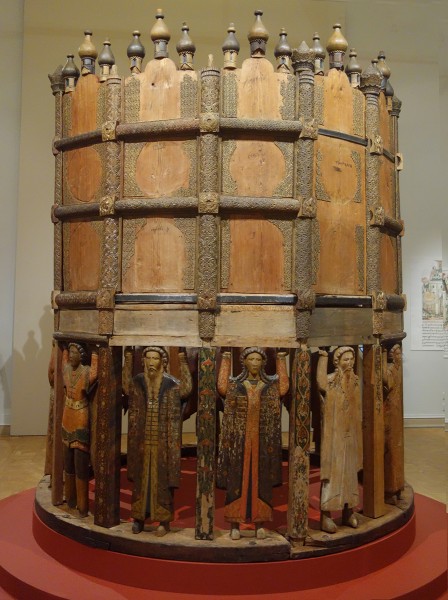 This 1533 ambo from St. Sophia Cathedral in Novgorod is an authentic and unique masterpiece of carved wood from the time of Archbishop Macarius. This ambo was preserved along with other similar Old Russian artifacts from the medieval art.

The tradition of using ambo during the liturgical service comes from early Middle Ages. In the Greek Church, the ambo was an elevated platform in the church and was devoted to read the Holy Scripture, preach sermons, sing liturgical singing and was also used for coronations of emperors. According to the symbolic interpretation of the Christian Church, the ambo represents: “The stone of the Holy Sepulchre, on which the angel sat after he rolled the stone away, proclaiming the resurrection of the Lord”. Decorations of Byzantine artifacts corroborate this interpretation: the representation of the cross, the Chrism, peacocks and grape vines. The elevation of the cross on the ambo corresponds to the Elevation of the Cross in Golgotha. When the Kievian Rus embraced the Christian faith, they received already existing church rite from Byzantium. Being on the ambo was assimilated to the angel’s devotion and required a special spiritual state from the people who stand on it. The idea of a spiritual ascending to an ideal City, Church, New Jerusalem and the idea of an elevated service is the main theme of the aesthetic and symbolic conception of the ambo of St. Sophia.

The ambo of Novgorod is a whole artistic ensemble of twelve different figures (eleven were preserved). Among the people who created carved ambo there is the “ambo master”, Grigory.

The faces of all the figures were made in the conventional icon style, the artist outlined their mouth, their eyes have an oval form, and they have wrinkles on their forehead or under their eyes. The expression of their face is dominated by detachment, which corresponds to the high solemnity of the sacred object, that they are holding in their hands. Almost every figure wears a cloak, which is tied with a knot, tightened with a buckle or thrown over their shoulders. The vibrant colours (pink, light green and yellow), the use of space, and bright ornaments on their attire indicate that the original appearance of the artifact was elegant.

As the Middle Ages end, at the end of the 17th century and the beginning of the 18th century, the construction of fixed ambo ceased in the Kievan Rus.

This artifact was found during the 19th century on the choir balcony of the St. Sophia Cathedral. It became the property of the Imperial Academy of Arts in 1860 and became into the possession of the Russian Museum in 1897. 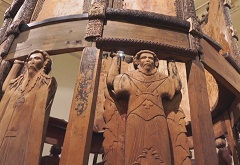