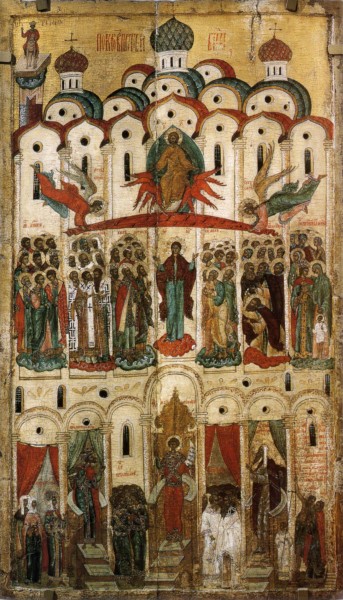 The Intercession of the Holy Virgin

Second half of the 16th century

The subject of the icon is taken from the Life of Andrew the Holy Fool, which tells of the miraculous vision of the Mother of God in the Church of the Blachernes in Constantinople, where her raiment is allegedly kept. The event occurred during the evening service, when Andrew and his protégé Epiphanius saw the Virgin walking on the air, accompanied by St John the Baptist and St John the Theologian and surrounded by a host of angels and saints in white robes. Russian icons traditionally depicted the episode when the Mother of God offers up a prayer in front of the altar and then removes her veil (maphorius), holding it out over the congregation below. The Festival of the Intercession of the Holy Virgin (14 October) is believed to have been first celebrated in Russia in the 1160s, during the reign of Prince Andrew of Bogolyubovo in Vladimir. It was only later that it was celebrated by the Greek Orthodox Church.