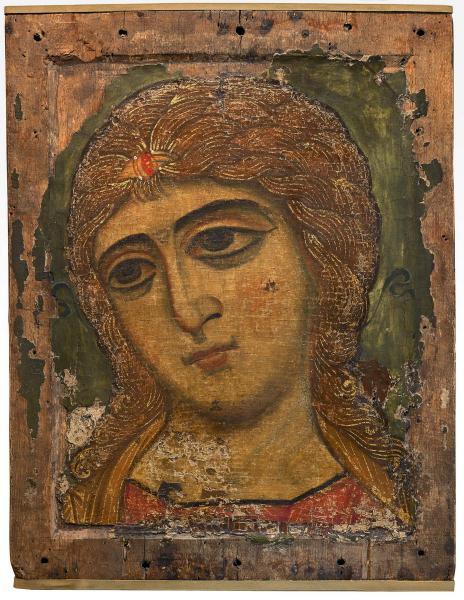 The Angel with Golden Hair

Dating from before the Mongol invasion, this is one of the oldest surviving Russian icons. The work appears to have found its way to Moscow in the sixteenth century, when it was hung in one of the Kremlin churches. It was possibly brought to the capital from Novgorod during the reign of Ivan the Terrible (1547–1584), who often plundered the city of its sacred objects. The main trends of theology in the late twelfth century suggest that the icon was part of a deisus tier — a row of icons of saints and angels flanking an image of Christ enthroned — in the altar screen. The large features, full cheeks and large, almond-shaped eyes on the wide, modelled face resemble the countenances on frescoes in the Chapel of the Theotokos on the island of Patmos. The icon is even closer in style to the murals of the Church of the Transfiguration of the Saviour on Nereditsa in Novgorod (1199), where it may have been part of the deisus tier on the altar screen. The history of Novgorod in the late twelfth and early thirteenth centuries and the strong influence of Byzantine decorative art explain the presence in Novgorod of a work reflecting the stylistic trends and artistic tastes of Moscow around the year 1200.