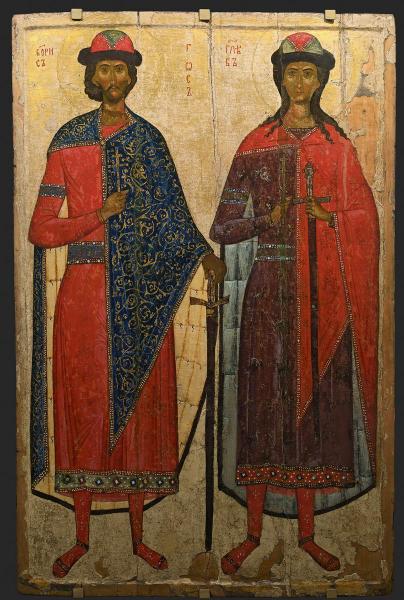 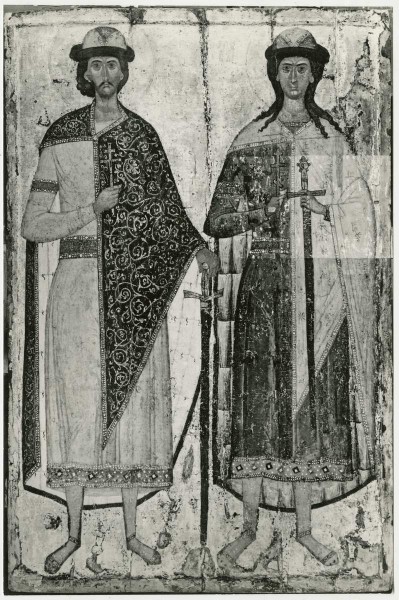 St Boris and St Gleb were the youngest of the twelve sons of Prince Vladimir of Kiev (978–1015). Boris ruled Rostov and Gleb ruled Murom.

After Prince Vladimir’s death in 1015, their brother, Svyatopolk of Turov, seized the throne of Kiev for himself and had the brothers murdered. For his act of fratricide, Svyatopolk became known in Russia as “the cursed”. Boris and Gleb were known for their humility and Christian virtues.

For meekly accepting death and refusing to raise their hands against their brother, they were worshipped as “passion-bearers”. Symbolising Christian meekness in the face of internecine warfare and sibling rivalry, Boris and Gleb were regarded as the first Russian martyrs. Their humble acceptance of death was likened to Christ’s own sacrifice and death on the cross. In 1037, Jaroslav the Wise canonized the two brothers, who became the first Russian saints. This particular icon depicts the two princes in royal robes, holding crosses and swords. The professional attributes of the work suggest that it was painted by a leading icon-painter in the fourteenth century.