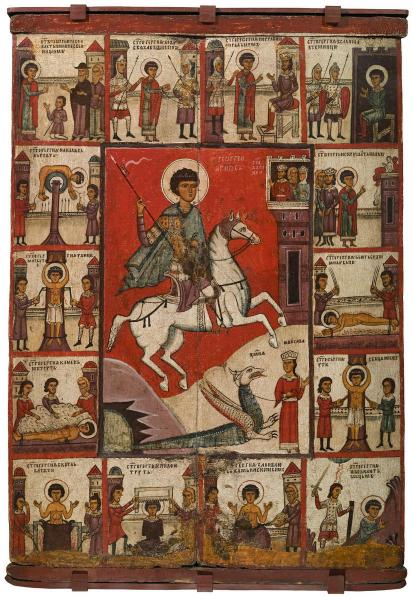 Miracle of St.George and the Dragon, with Scenes from his Life

St George, one of Byzantium’s most revered saints, was canonised in Ancient Rus and his feastday established under the reign of Yaroslav the Wise, who received the martyr’s name in baptism.At that time St George became the patron saint of Russian princes, and his image would come to play an important role in Russia’s religious and political life, appearing both on the coat of arms and coins of Muscovy. The saint was revered in equal measure as a valiant warrior and defender of the Russian land (“Egory Khrabry”) and as a patron of farmers and herdsmen. Innumerable traditions and rituals were connected with the saint’s feastday in the Old Russian calendar. According to folk legend, George on his steed was the first to enter the then-uninhabited land of Rus, which he settled, christened with the “baptismal faith” and took under his protection. These notions were likely responsible for the incredible popularity of St George’s icon in Ancient Rus (especially the northern and Novgorod lands), where an abbreviated iconography of George the Horseman and Dragon-Slayer a rose based on the saint’s post humous miracle of the dragon and maiden. More than simply illustrating the vita of St George, this heraldic image has a much broader symbolic meaning, representing the victory of goodness and faith over the forces of evil.