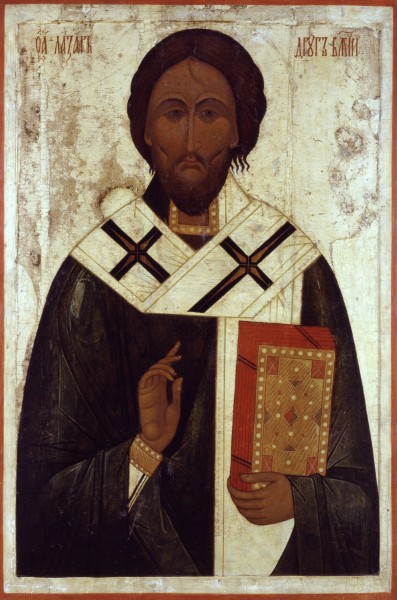 St Lazarus the Friend of God

The icon depicts St Lazarus, the friend of God, who was raised from the dead by Jesus Christ on the fourth day (John 11:1–44). Images of the Raising of Lazarus were popular in Christian art and the event is celebrated by the Orthodox Church on Lazarus Saturday during Lent. The image of St Lazarus as a bishop is based on the legend of his ordainment as bishop of Larnaca on Cyprus. Such representations were popular on Cyprus and in Russia, where the worship of the saint was already established in the twelfth century. Images of Lazarus were particularly popular in Novgorod, where pictures of the saint still survive in the murals of St Nicholas Cathedral in Yaroslav Dvorishche (circa 1113) and the Church of the Transfiguration on Nereditsa (1199). The widespread worship of Lazarus in Novgorod led to the erection of a Church of St Lazarus (built no later than the late 14th and early 15th centuries; dismantled in 1859). The interpretation of Lazarus face betrays the artist s orientation on historical icons. The passion for generalisation and monumentalism can also be seen in the folds of the cloths, the simplified ends of the omophorium and the distinctive geometric drawing of the closed Gospel.