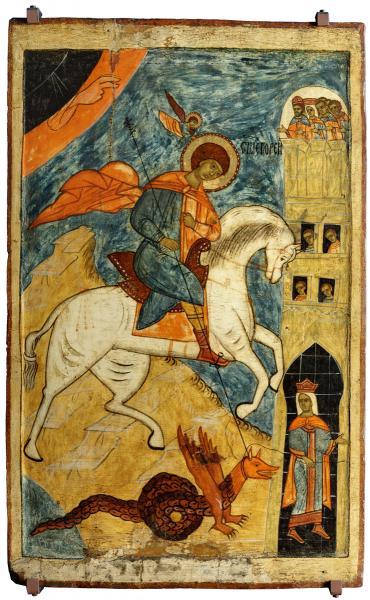 Miracle of St George and the Dragon

Vologda. First half of the 16th century

St George, one of Byzantium’s most reveredsaints, was canonised in Ancient Rus and his feastday established under the reign of Yaroslav theWise, who received the martyr’s name in baptism.At that time St George became the patron saint ofRussian princes, and his image would come toplay an important role in Russia’s religious and politicallife, appearing both on the coat of arms andcoins of Muscovy. The saint was revered in equalmeasure as a valiant warrior and defender of theRussian land (“Egory Khrabry”) and as a patronof farmers and herdsmen. Innumerable traditions
and rituals were connected with the saint’s feastday in the Old Russian calendar. According to folklegend, George on his steed was the first to enterthe then-uninhabited land of Rus, which he settled,christened with the “baptismal faith” and took underhis protection. These notions were likely responsiblefor the incredible popularity of St George’s iconin Ancient Rus (especially the northern and Novgorodlands), where an abbreviated iconographyof George the Horseman and Dragon-Slayerarose based on the saint’s posthumous miracle ofthe dragon and maiden. More than simply illustratingthe vita of St George, this heraldic imagehas a much broader symbolic meaning, representingthe victory of goodness and faith over theforces of evil.
«Виртуальный Русский музей» в социальных сетях: