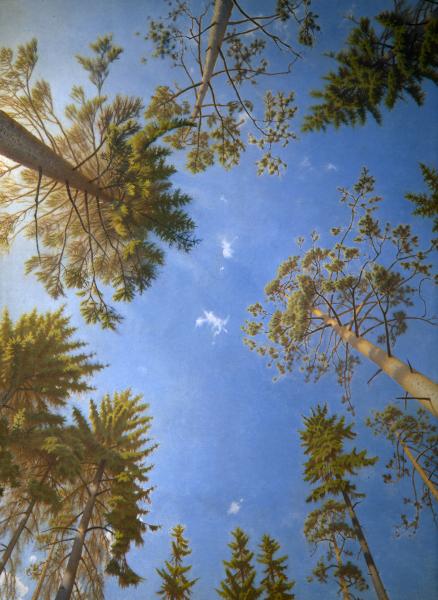 The forest landscape presents itself as if seen through a wide-angle lens whereby the viewfinder is directed straight to the sky, the conifers soaring upwards perspec- tively in an extremely contracted form. In the centre of the picture the view is cleared for the bright blue sky in which a few small white clouds are just in the process of dispersing.

Bulatov's works are frequently developed from photographic models, yet, in spite of the illusionistic image conception, the function of his works lies not so much in the reproduction of reality; the painting is rather to be understood as an autonomous object. The oil work Melting Clouds goes back to a very well-known photograph by Aleksandr Rodchenko.

The artist has combined many of his pictures with texts originating from official Soviet terminology. Thus ironic commentaries arise on the political and social situation in the country. In spite of forgoing a commentary inscription, Melting Clouds can be seen within a political context i.e. as a metaphor for the world-reaching changes and transformations of Soviet society attempted towards the end of the nineteen eighties.