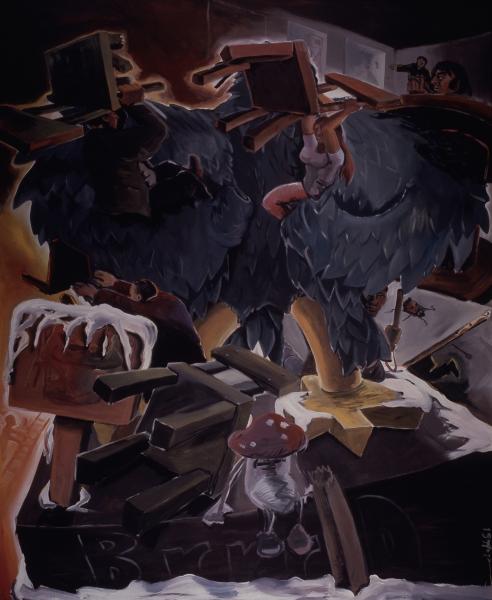 Immendorffs work depicts two figures attacking each other using chairs as weapons, but they are held apart by an eagle's wings. The rancorous atmosphere is underscored by the poisonous amanita fungus in the foreground (which, ironically, figures in German popular and children's art as a harmless fairy toadstool).

The painting was done in connection with the well-known series Café Deutschland, in which Immendorff began addressing the relationship between the two Germanies in 1977. Hardly another artist has devoted himself so intensively to visualizing the tensions between West and East. Immendorff himself appears twice in the composition: once as a painter sticking his head through a canvas which doubles as The Wall, and again as an instructor in a gallery, explaining his own pictures. This integration of his own personality indicates the artist's identification with his work, but it also reflects Jörg Immendorff's personal conflicts with the political and social structures of the day.