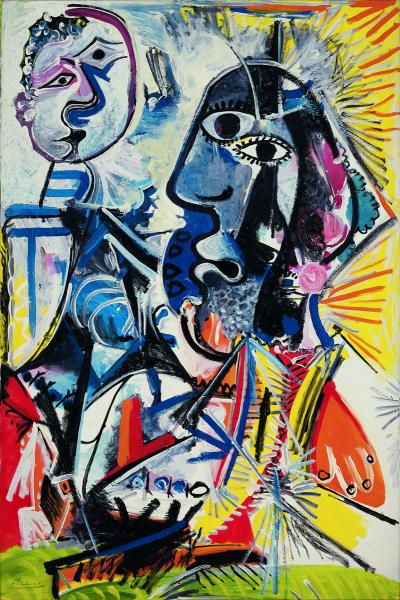 "Painting is stronger than I am. It forces me to do what it wants." (Picasso)

The small, almost round head before a bright background, which can be seen both en face and in profile, can be interpreted as a child's head. With an outstretched arm and a raised left hand, the child's posture suggests that of an archer. An interpretation of this figure as the portrayal of the Greek god Amor would present itself here. The very much larger oval head which likewise shows the principle of disclosing various views has, as a result of the angular face fragments, been described by researchers as a man's head. The body outlines of this figure seem to be determined by the red colour; on the right we recognise a hand placed at shoulder level. The long yellow- coloured surface next to this, outlined with lines of light, can be understood as as sword i.e. a belligerently armed figure. Amor and warriors stand symbolically for love and war, the elemental forces and drives of life which Picasso presented for contemplation in continually new formulations.

The last decade in the life of Pablo Picasso, that genius of the twentieth century who shaped and influenced the modem age as no other artist did, is characterized by untiring artistic activity, a tremendous productivity in drawing and painting. Almost obsessed, he paints against the time left to him, enjoying life and art right up to the very finish.