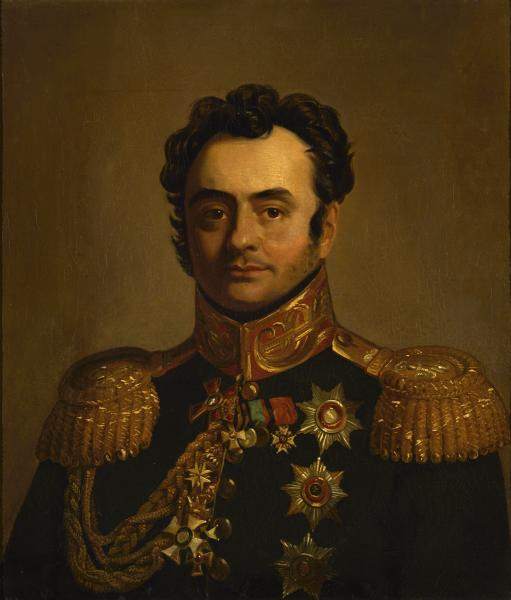 Pavel Andreyevich Shuvalov (1774, 1776 or 1777–1823) was a Count, the son of Count Andrei Shuvalov and Countess Yekaterina Saltykova. In 1786–1796 he served in the Life Guards Horse Regiment, as a gentleman of the Bedchamber (1796), colonel (1798); Adjutant General of Emperor Alexander I (from 1807), Commander of the Fourth Infantry Corps (1811). He participated in the storming of Prague (1794), the Italian campaign led by Alexander Suvorov, the Russo-Swiss war (1808–1809), the Patriotic War of 1812. He accompanied Napoleon from Fontainebleau to exile on the island of Elba. He was married to the Princess Varvara Shakhovskaya (1796–1871). He appears here in the uniform of a general of the Imperial Suite with the following orders: St Alexander Nevsky (star); St Vladimir of the 2nd class (star and cross on the neck); St Anna of the 1st class (star); St George of the 4th class (cross); the Sign of the Order of St John (Maltese cross); Military Merit (Württemberg); St Louis (France); Maximilian Joseph (Bavaria) and the Commander’s Cross of the Order of Leopold (Austria).

This is a copy of the signed portrait, which is located in the military gallery of the Winter Palace (State Hermitage). It is possible that it was completed in Dawe’s studio.