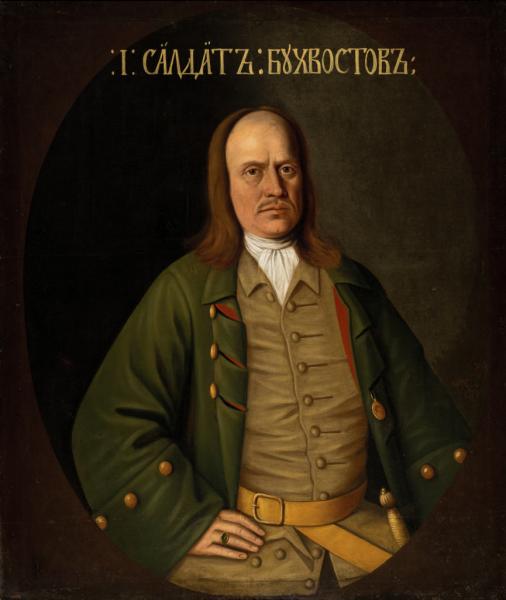 Sergei Bukhvostov (1642 (59?) –1728). The “first Russian soldier”, began his service at court as a solicitor (stryapchy). In 1683 he was the first person to be enrolled in the Toy Army of Peter the Great, subsequently the Preobrazhensky Regiment. In 1695 he took part in the Azov campaign as Corporal of a company of bombardiers, and was promoted to Second Lieutenant for his participation in the Northern War. After being wounded during the Siege of Stettin he was promoted to Major and transferred to the Petersburg Garrison Artillery.

The portrait of Sergei Bukhvostov, the “first Russian soldier”, was not mentioned in the 1735 inventory of the Preobrazhensky Palace, but it had a definite stylistic similarity to the eight main pictures of the series. The portrait of Bukhvostov was dated based on the gold medal attached to his buttonhole, commemorating the Pruth campaign of 1711. People remembered the “first soldier”. There are reports that in 1724 Peter the Great commissioned a bust of him from the sculptor Bartolomeo Rastrelli. In 1728 the “St Petersburg Gazette” published Bukhvostov’s obituary.