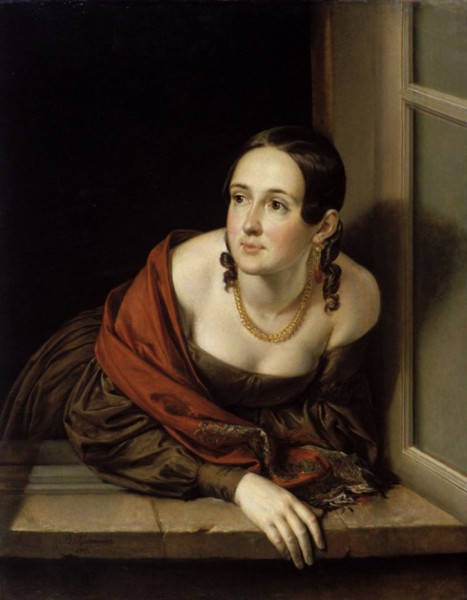 The Woman in the Window (The Paymaster's Wife)

The Woman in the Window, one of Tropinin’s best-known works, was written under the spell of Mikhail Lermontov’s poem The Tambov Paymaster’s Wife. If a certain domestic flavor is inherent in other of Tropinin’s portraits, in the The Woman in the Window this easy sincerity takes on an erotic flavor. Gazing upon this enchanting woman, one can’t help but recall Lermontov’s lines. where he describes the beautiful wife of the old gubernia paymaster Bobkovsky:
And she was born, 'twould seem,
For passion’s tender sighs.
Were fairer than her eyes
The sky’s azure, the turquoise’s gleam?
That nose! Those lips! They’re two
Rose petals kissed by dew!
Those teeth so pearly white;
That voice so sweet, as in a dream!