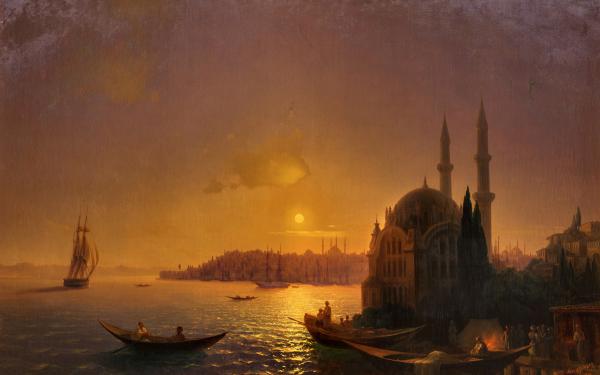 A View of Constantinople by Moonlight

After his return in 1836 from his study trip, Ivan Aivazovsky was awarded the title of an academician of the Imperial Academy of Arts and worked for the Russian Navy as a painter. These new obligations allowed him in the following years to travel with the Russian seaman and geographer Fyodor Litke and visit Turkey, Greece, and Asia Minor. These trips allowed him to absorb new influences.

The painter began to work on this painting on 15th of January 1846 and finished it on 16th of March of the same year. This painting was displayed on  18th of March 1846 in Feodosia, during an exhibition dedicated to the 10th anniversary of the painter's artistic work. Researchers have suggested that this painting was purchased by Nicholas I, and was then in the possession of the Grand Duke Konstantin Nikolaevich and was then part of The Marble Palace’s collection (?).