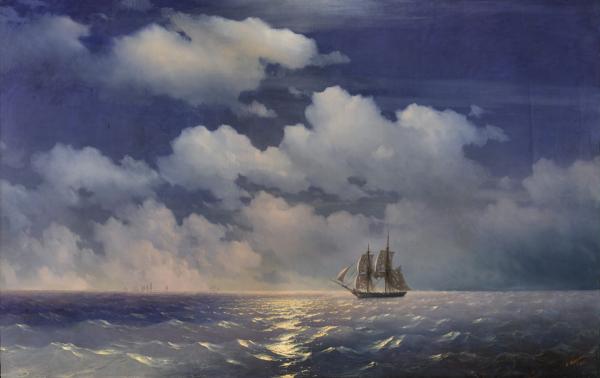 One of the episodes of the heroic epic of the Russian brig “Mercury”, which occurred on 14th of May 1828–1829. The 18 guns brig under the command of captain lieutenant Alexander Kozarsky was under attack of the Turkish line ships “Selimiye” and “Real bay”, which together counted 184 guns. Thanks to a skilled manoeuvre and the high bravery of her crew, the ship inflicted considerable casualties to her opponents, forced the ships to heave aback, escaped pursuit and reunited with the Russian Squadron. Aivazovsky depicted the final moment of the combat, when the “Mercury”, which had many shot holes, moved in full sail toward the Russian ships.