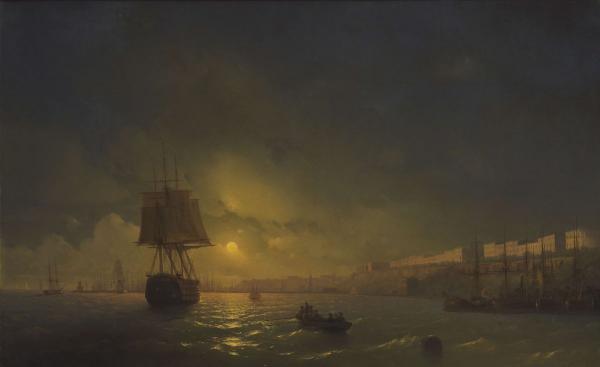 View of Odessa on a Moonlit Night

Prior to his voyage to Constantinople, Tsar Nicholas I asked Aivazovsky to paint views of such Russian seaports as Odessa, Sebastopole and Kertch. This particular work was painted in the Crimea and first exhibited in Odessa. It was then shown in Theodosia during the celebrations marking the tenth anniversary of the artist’s professional career. The Odessa Herald wrote: “The longer one stands in front of Aivazovsky’s view of Odessa, the more it enchants the eye.The sea has so much life and movement, and the light on the ripples is so natural. One is amazed at the artist’s ability to capture and convey the charm of the southern moonlit night with such inimitable verity.”