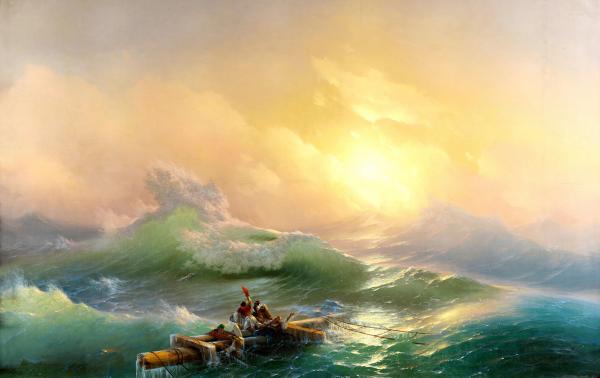 The Ninth Wave is probably Aivazovsky’s most famous and popular work. Originally acquired for the Imperial Hermitage, it was one of the first paintings in the collection of the Emperor Alexander III Russian Museum in 1897. The ninth wave — in popular legend, the most terrible, powerful and destructive wave — is fast approaching. Yet the darkness of the night is broken by the light of hope. A small group of people cling to the wreckage of the ship’s mast, which seems a more reliable refuge at dawn than it did in the darkness of the night. The desperate attempts to survive will conquer the stormy sea. The Ninth Wave was, of course, also interpreted allegorically. The painting acquired symbolic meaning for many generations, instilling faith in the victory of man, humanity and life.