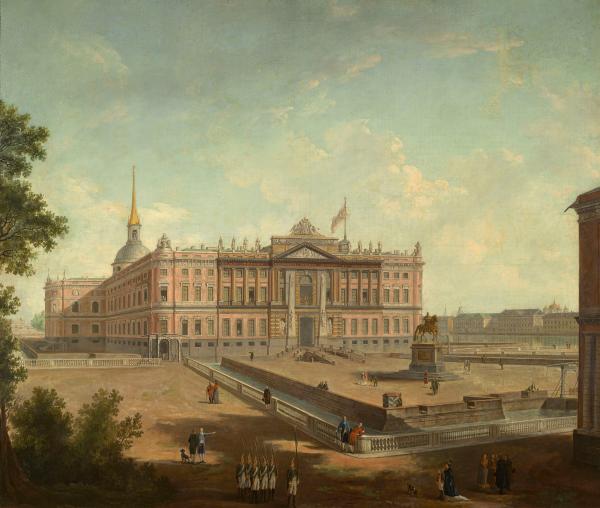 From western and southern sides two artificial canals washed the island, where St. Michael’s Castle is located. The system of castle’s fortifications, surrounding the palace and the Connetable Square in front of it, included canals, demi-bastions, leaf bridges and cannons.

The square of constable Anne de Montmorency (1493–1567) in Chantilly, which Paul I visited during his trip to Europe, served as a prototype for the square in front of the St. Michael’s Castle.

In 1800 the monument to Peter the Great moulded in 1745–1747 by Bartolomeo Carlo Rastrelli was erected on the square. In fact, the square looked a little different from its image on Akeseyev’s painting (fence, level of square).

Connetable (from latin Comes stabuli, French Conte de l’Outable) was initially a court title in Western Roman Empire. In France it was a person responsible for the king’s stables, and since 12th century it stood for a commander of all armies.

In 1822 the painting was exhibited in the English Palace in Peterhof, in 1827–1831 in Warsaw, in the palace of Grand Duke Konstantin Pavlovich.