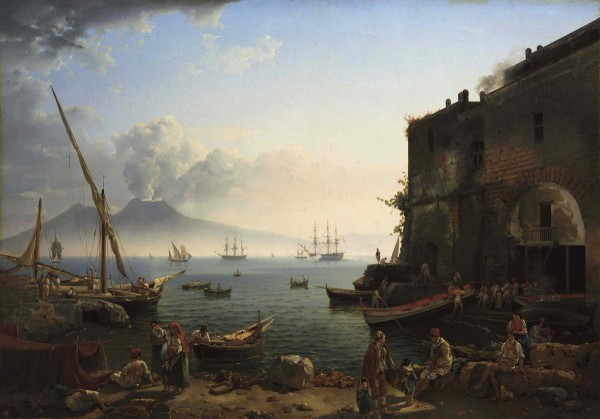 The artist depicted on the canvas the waterfront of Santa Lucia, glorified in songs and poems of Naples, which was a favorite place for walking. Shchedrin in one of his letters described it this way: "You can imagine all the jumble yourself: the shore is lined with racks where lazarons sell oysters and other sea vermins, and the fish, there is also a well of sulfur water, taverns, where people go to eat only fish, and eat outdoors under my windows; here the chairs for the audience are placed on the sides, a lot of people fill this part of the city." The artist lived for a couple of years on the waterfront of Santa Lucia, calling it "the best place of the whole of Naples".

In 1940, the picture was given by the Russian Museum for temporary storage to Alupka Palace Museum as part of a travelling exhibition. During the Second World War it was lost. At the order of the Ministry of Culture of the USSR it was excluded from the stock of the Russian Museum. In 1978, the painting was found in Yalta in a disastrous state of preservation and was transferred to the Exhibition complex of sanatorium "Livadia", from where in 1980 it was transferred to the State Scientific Research Workshop of the Ministry of Culture of Ukraine in Kiev, where it was restored.