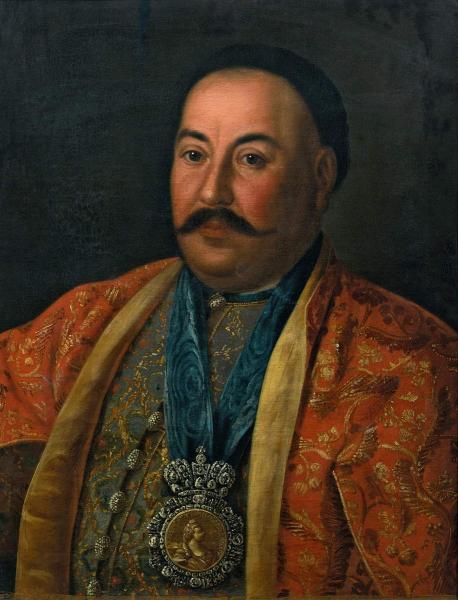 Portrait of Brigadier Fyodor Krasnoschekov, Ataman of the Don Cossachs

Fyodor Krasnoschekov (?–1764) Field Ataman of the Don Cossacks since 1748, became brigadier in 1755 and major general in 1763. He fought in the Seven Years’ War. He is depicted in Cossack clothing and wears around his neck a ribbon with a gold medal of Elizabeth

Petrovna’s portrait encrusted with diamonds. This medal was established for awarding the Cossacks.

The portrait emphasizes Krasnoschekov’s dignity by a solemn and static posture. The large size of the painting is smoothly harmonized with the ornamental and expensive fabrics.  In general, the elegance and the brightness of the portrait’s colours reveal the tradition of the parsuna art (from a word "person"). The artist creates a reliable, and thus vivid and powerful image of his model.