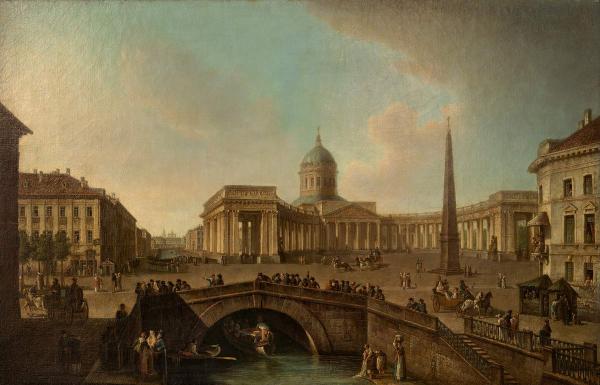 View of the Kazan Cathedral in St Petersburg

The Kazan Cathedral in St Petersburg is one of the most important churches in the Orthodox world. It houses one of the two most venerated duplications of the Our Lady of Kazan icon, the patroness of the imperial house and the protector of the Russian land. The cathedral, built from 1801–1811 from a design by Andrei Voronikhin, was intended to emphasise the political aspirations of the Russian Empire. The majestic colonnade of the cathedral, spreading out toward Nevsky Prospect, is reminiscent of St Peter’s Basilica in Rome. This is the influence of both the romantic interest in Catholicism and the mission of Russia in the greater Christian world. In the solemn rhythm of the forms of the orders of Classical architecture, undoubtedly, there is a kind of heroic sensibility. And it is no wonder that after Napoleon’s expulsion from Russia, Kazan Cathedral became a war memorial, where in 1813 the ashes of Field Marshal Mikhail Kutuzov were laid to rest, and trophies of the Patriotic War of 1812 were housed: flags, banners, and keys to forts and cities.

Fyodor Alexeyev depicts Andrei Voronikhin’s Kazan Cathedral and the original layout of the adjoining square. The wooden obelisk crowned with a cross stood in the centre of the square until 1826. Ivan Martos’s plaster figures of St Gabriel the Archangel and St Michael the Archangel stand at the ends of the colonnade. Pendant statues of Field Marshal Mikhail Kutuzov and Field Marshal Michael Barclay de Tolly were opened outside the Kazan Cathedral in 1837.

The landscapes of Fyodor Alexeyev are created with accurate views of the city, which capture its emotional picturesqueness. In front of the Cathedral of Our Lady Kazan there is an obelisk erected in honour of the sanctification of the building. The painter drew not only the capital’s greatness, but he also depicted its everyday life. The simple street life surrounds the edifice: kiosks and stalls, laundresses washing the clothes in the canal, boats going under the bridge, on which bystanders walk. The figures of people are clustered in an intricate genre.