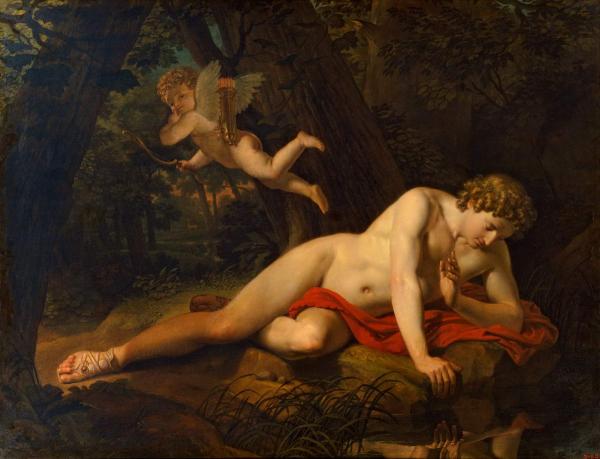 Narcissus, Looking into the Water

The subject is taken from the third book of Ovid's “Metamorphoses”. Narcissus, a handsome young man from Festia or Lacedaemon, was the son of the nymph Liriope and Cephissus. It was predicted to his mother that he would live to a great age, if he did not see his own face. As a boy Narcissus often hunted in the woods. On one hot afternoon, weary from the heat, Narcissus bent over the source to quench his thirst and saw his face. According to Ovid: “While he is drinking he beholds himself reflected in the mirrored pool — and loves...” Having forgotten about sleep and food, Narcissus, who had never loved anyone, spent days and nights on the shore, admiring his reflection, and died of sorrow. The gods turned him into a flower, which became known as a Narcissus.

This painting is recognized as one of the best K.P. Brullov’s works of the period of his studies at the Academy of Arts. In 1819, in the class of Andrey Ivanov a male figure was "presented" as a task for painters – a figure of a reclining young man, leaning over the water. According to the memoirs of contemporaries, the artist painted the landscape background in the Park of the Stroganovs’ dacha on the Chernaya river. In 1819 for this painting Brullov received a gold medal of the second rank.

"Metamorphoses" (Lat.) – a poem by the Roman poet Ovid consisting of fifteen books, which focuses on various transformations that have occurred since the creation of the world, according to Greek and Roman mythologies. The poem was written by Ovid in Rome between 2 and 8 years A.D.