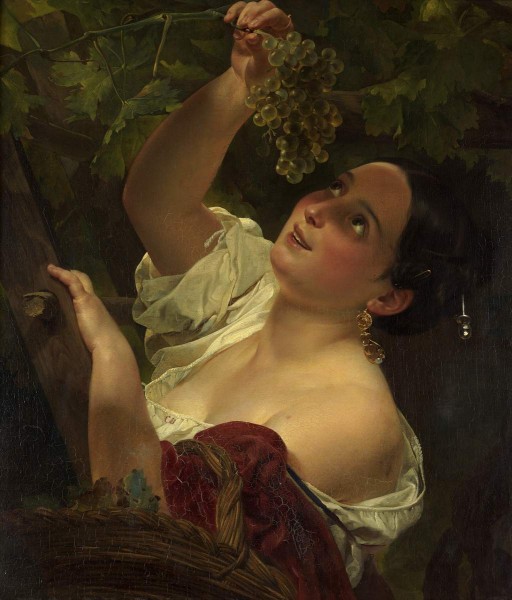 Karl Brullov painted this small canvas as a pair to the composition Italian Morning (1823, Kunsthalle, Kiel, Germany), which had received a favourable reception in St Petersburg. Tsar Nicholas I commissioned the work from Brullov through the Society for the Encouragement of Artists in 1826. In March 1827, Brullov wrote to the Society for the Encouragement of Artists: “My main activity now consists of finishing the painting for His Majesty.” Italian Midday (Italian Girl Picking Grapes) was finished in June 1827. It was sent to St Petersburg in August 1827 through the Russian consulate in Rome. Although both paintings, Italian Morning and Italian Midday, hung in the private chambers of Empress Alexandra Fyodorovna in the Winter Palace, they could still be seen by artists and the public. In his diary entry for 14 October 1835, Apollon Mokritsky records a visit that he and Alexei Venetsianov made to the Empress’s boudoir in order to inspect Brullov’s works. A great many copies of the painting were made from the 1850s onwards.