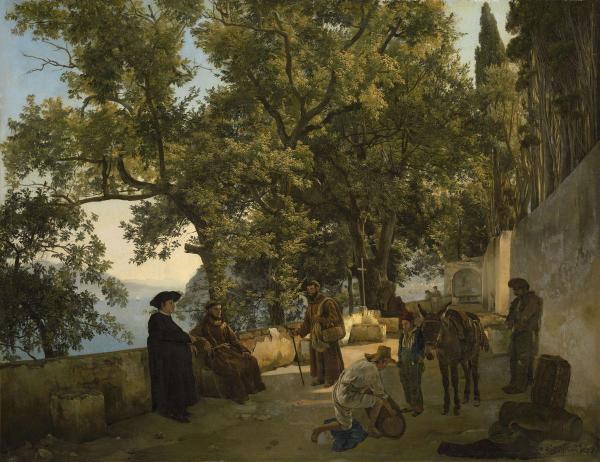 Terrace on the Sea Shore. Capuccini near Sorrento

Sylvester Schedrin employs here the motif of a “landscape interior”, formed by the greenery of the trees and permeated with light and air. The location of the terrace, with its distinctive architecture, was established thanks to drawings made by unknown nineteenth century amateur artists. Among the drawings were found sketches of that same terrace, with an inscription testifying that they portrayed the settlement of Capuccino near Sorrento. Schedrin particularly enjoyed painting Naples’s colourful poor. In his searches for figures typical of Italy, the artist also depicted monks and a Catholic priest.

It was probably about him that Shchedrin wrote from Sorrento to brother in Russia, telling that the priest refused to take payment for posing and only agreed to serve a mass for the repose of the soul of his father.

The location of the terrace with its characteristic architecture was possible to set by the drawings made by an unknown 19th century amateur artist. Among them were sketches of this terrace with the inscription that they showed the village of Capuccini near Sorrento. In Shchedrin’s heritage, there are several paintings called "Verandas" or "Terraces". The images were similar to each other in composition and enjoyed great success, and the artist was asked to paint them again and again.