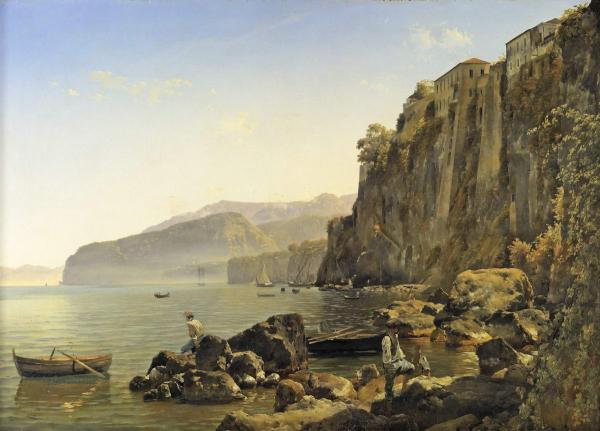 A View of Sorrento near Naples with Tasso's House

Sorrento is a small town in Italy on the southern shore of the Gulf of Naples, in the Campania region. In 1544 in Sorrento the famous Italian poet of the sixteenth century Torquato Tasso was born. In later times it became the residence of Goethe, Wagner, Nietzsche, Gorky, Ibsen, Byron, Stendhal, and many other prominent personalities who turned staying in Sorrento into kind of a cult. Shchedrin regularly lived and worked in Sorrento since 1825, picturing a lot of landscapes in its surroundings. The artist himself called this motive "View of Sorrento with Tasso’s House". In fact, the house where Torquato Tasso (1544–1595) was born fell into the sea together with part of the coast back in ancient times. In the 19th century the legend associated one of the old houses on the rocky shore of a small promontory, that separates the Big and the Small Marinas of Sorrento, with the name of Tasso. Shchedrin performed his painting from the Big Marina, looking from west to east, in the direction of the Small Marina. In the background one can see the mountainous peninsula Punto Scutolo with its extreme point of the Cape Gradelle, rounding up the waters of Sorrento from the east. Currently, there are five variants of this subjects: one in the RM, in the Alupka Palace Museum, Primorskaya Art Gallery (Vladivostok), two in the State Tretyakov Gallery.