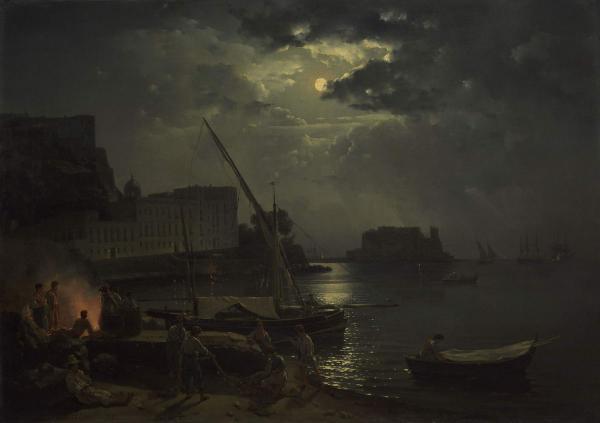 Naples on a Moonlit Night. Via Partenope and the Castel dell'Ovo

Presents a view of Naples waterfront from west to east. In the centre there is via Partenope – the street, which was a passage from the Royal gardens to the waterfront of Santa Lucia. Above we see the houses on the hill Pizzofalcone and the dome of the Church of San Francesco di Paola. On the right appears Castel dell'Ovo. The painting is known in four versions.

In the last years of his life, continuing his artistic searches, Shchedrin painted a lot of night scenes. Most of them are small works in which the artist with special lyricism conveyed soft light of the moon, transforming the familiar landscapes. However, towards the end of his life the dramatic element enhances in his work. From the almost classical clarity of attitude in his early works Shchedrin shifts to a more dramatic awareness of being.

Known in several variants, the painting "Naples on a Moonlit Night" is a painting of complex composition, in which the artist solves a difficult picturesque task of combining cold light of the moon with the flame of a burning fire. At this he also conveys the specific life of the night city and the general atmosphere of anxiety and tension, creating a work imbued with strong romantic moods.