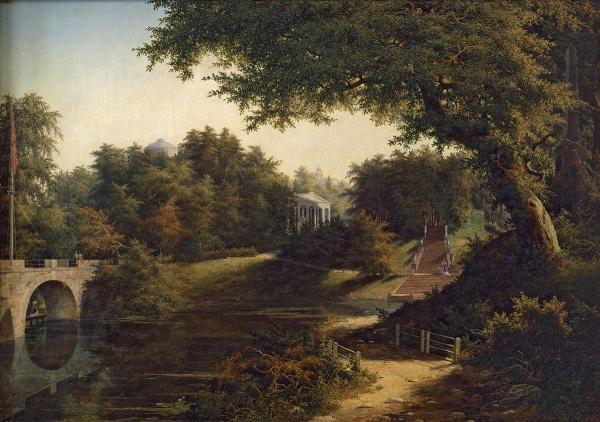 A View in the Pavlovsk Park

The Pavlovsk Park is one of the picturesque parks in the vicinity of St. Petersburg. It was many times depicted in the painting. A pupil of the artist Maxim Vorobyov, Alexei Voloskov portrayed the view onto the Pavlovsk Palace from the Slavyanka River and Marientahl Park. On the right on the hill, one can see the obelisk to foundation of Pavlovsk designed by Charles Cameron in 1782. In the background there is the Pavilion of The Three Graces designed by Charles Cameron, in the centre of the pavilion the marble sculpture “The Three Graces” by Paolo Triscornia is located. On the left, one can see the dome of the Pavlovsk Palace (architects Charles Cameron, Vincenzo Brenna, Andrei Voronikhin, 1782-1804). The painting used to be attributed to Mikhail Lebedev but in 2007 the authorship of Voloskov had been confirmed by the stylistic and technological research during which the signature of the artist and date were discovered on the canvas.