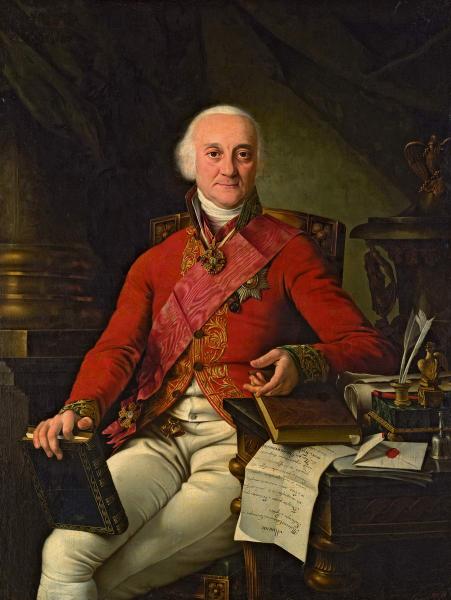 Portrait of the Privy Councillor and Senator Pavel Runich

Pavel Stepanovich Runich (1747–1825) was born to Hungarian parents and studied at the Military Corps for Gentlemen. He was commissioned with the inquiry into the Pugachev rebellion, and he authored “Notes on the Pugachev Riot”. He was a friend of Nikolai Novikov. During the reign of Paul I, he acted as governor of Vyatka and Vladimir. He was a privy councillor and senator (1805). He was an honoured amateur of the Imperial Academy of Arts. He appears here in his senator’s uniform with the Order of St Alexander Nevsky (cross and star on a ribbon) and St Anne of the 1st class (cross on the neck); on his chest is the medal “In Memory of the Patriotic War of 1812” (bronze, on the ribbon of St Vladimir). The sheet of paper lying on the table is entitled: “Opinions/ of a Privy Councillor, Senator and/ Gentleman, Runich”. The portrait was used as an application to the Academy, to which the artist attained admission in 1818.