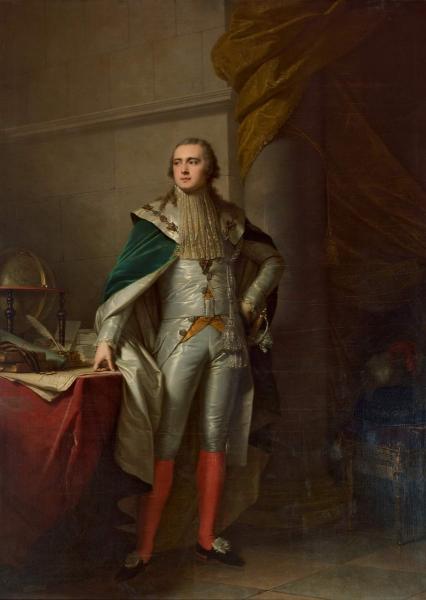 Valerian Zubov (1771–1804) was the son of Andrei Zubov. He began his service in the Preobrazhensky Regiment of the Imperial Guard, and then switched to the Cavalry. Lieutenant colonel (1789). He received the rank of colonel for reporting the capture of Bender and was granted aide-decamp status. For his participation in the Storm of Izmail, he was awarded the Order of St George of the 4th class (1789). He was made a Count in 1793. He participated in military action in Poland (1792, 1794), and in the Persian Expedition of 1796. In 1797, he was dismissed by Paul I. In 1800, he was again accepted into the service with the rank of general from the infantry, and was named Director of the 2nd Cadet Corps in St. Petersburg. He participated in the conspiracy of 11 March 1801. Member of the State Council (1801). He was married to Countess Maria Pototskaya (née Lyubomirskaya). He is buried in the Zubov family crypt at the Trinity-Sergius Hermitage (outside St Petersburg).