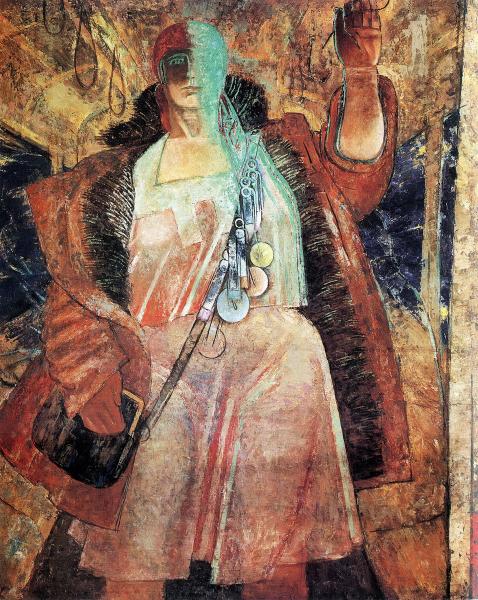 In the 1920s, like many other artists, Alexander Samokhvalov engaged in quests for typical features of modern life. The rapid changes were particularly evident in the images of women, who assimilated new social roles, professions, lifestyles and clothes. The conductress selling tickets and maintaining law and order in the tram is like a new goddess or commandress of electricity. The proportions of her static figure date back to images of pagan sculptures – stone stele – and Old Russian frescoes. Illuminated by flashes of electric light, she dominates the futuristic and dynamic interior of the tram thundering along the rails. The artist wrote about this work: “The main thing that I wanted to say was that the colossal, terrible force of electricity – previously only considered subordinate to Elijah prophet and Zeus the thunderer – is now subordinated to a simple woman worker. Were she to come face to face with Athena in her chariot, it is Athena and not the conductress who would be surprised.”