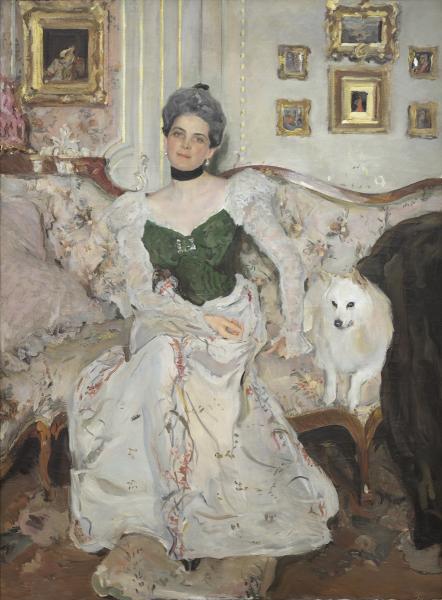 One of the leading Russian fin-de-siècle portraitists was Valentin Serov, who painted many society portraits from the 1890s onwards. This particular work is part of a series of portraits of the Yussupov family painted by Serov at the start of the twentieth century. Princess Zinaida Yussupova was the last member of this old aristocratic family. She is depicted at her country house in Archangelskoe near Moscow, a magnificent mansion famed for its great luxury and beauty. Serov was charmed by Zinaida’s quick mind and natural manner. The sitter’s nobility is highlighted by the clear composition, the enamel-like texture of the painting, and the refined gold-pink tones sharpened by patches of dark-green and black. Deprived of “chic” and serious in concept, Valentin Serov’s masterly and elegant picture was a major step forwards in the development of the official Russian portraiture of the eighteenth and nineteenth centuries.