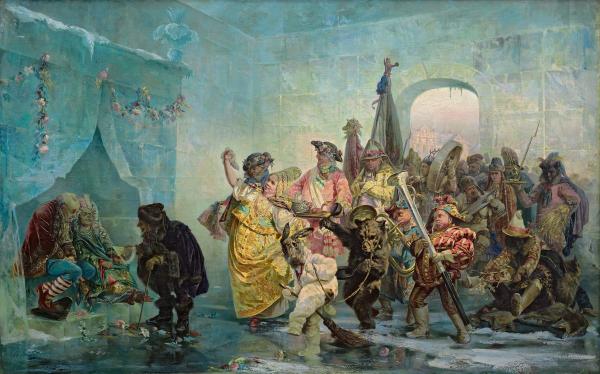 Valery Jacoby painted a whole series of pictures with subjects taken from the time of Empress Anna Ioannovna. The painting The Ice House occupies a special place among them, and depicts one of the strangest episodes in the life of the imperial court.

The Ice House was built on the square between the Admiralty and the Winter Palace during Shrovetide in 1739. The outside walls and the inner décor were entirely made of ice. The Ice House was the site of the marriage of the Empress’s jester Prince Mikhail Golitsyn to her female jester Eudoxia Buzheninova (probably a deliberate nickname, as buzhenina was the Empress’s favourite dish, cold baked pork). Besides the Empress and her courtiers, the wedding festivities were attended by a total of 150 representatives of the various nationalities inhabiting the Russian Empire, including Ukrainians, White Russians, Finns, Tatars, Komi-Zyrians and Kamchadals (Itelmens). The guests donned their national attire and engaged in traditional folk dancing. When the feast was over, the newly-weds were taken back to the Ice House and locked in for the night.

The story of the jester’s wedding led Ivan Lazhechnikov to write a critical novel entitled The Ice House. Although Valery Jacoby appears to have read the book, his painting concentrates more on the external facets of the episode. The artist depicts the bright and motley crowd dancing before the Empress and her courtiers.