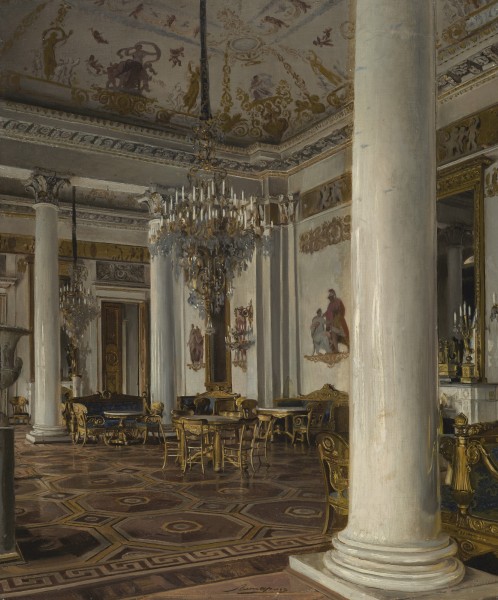 The Mikhailovsky Palace, built in 1818–1825 from a design by Carlo Rossi and occupied today by the Russian Museum, had already acquired its pan-European fame as a perfect example of the Empire Style during the architect’s lifetime. On the second floor of the palace, Rossi created a brilliant suite of ceremonial rooms with decorated mirrors, moulding, paintwork, silks, mosaic parquet, and carved gilded furniture. In the late 19th century, the decoration of the halls were seriously damaged during the process of adapting the palace to serve as an exhibition space for the Russian Museum, but in their current appearance, they are able to render the viewer speechless with their simultaneous elegant splendour and classical harmony. The Second Ceremonial Living Room occupied a special place among the rooms, which was also known as the White-Columned Hall or the White Dining Room. In this room, the lady of the palace, Grand Duchess Elena Pavlovna regularly held literary and musical evenings that were resplendent with the talents of Russian and European luminaries, among whom were Hector Berlioz, Franz Liszt, Mikhail Glinka, Anton Rubinstein, and many others.