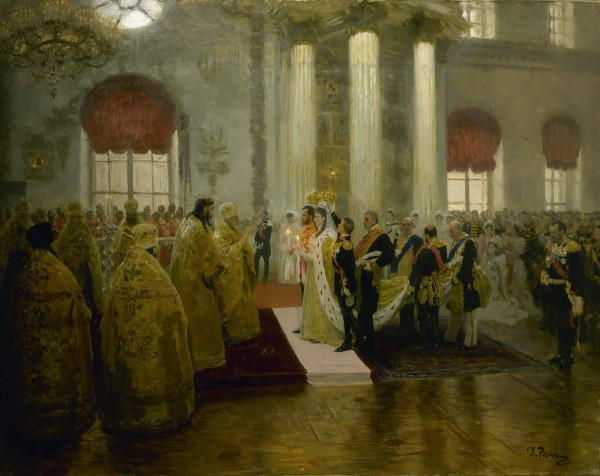 Ilya Repin depicts the marriage of Tsar Nicholas II (1868–1918) and Princess AlixVictoria Helena Luise Beatrice of Hessen (1872–1918). Alix converted to Russian Orthodoxy as Grand Duchess Alexandra Fyodorovna (1894). She and Nicholas were married at the Winter Palace chapel on 14 November 1894. The chapel is filled with members of the Imperial family, foreign diplomats and members of the Holy Synod and the State Council.The young man stand-ing next to Alexandra Fyodorovna is the Tsar s youngest brother Grand Duke Mikhail Alexandrovich (1878–1918), in favour of whom he later renounced. To the right of the tsar is his mother Dowager Empress Marie Fyodorovna (1847–1928). This ceremony occurred soon of the passing of Emperor Alexander III, who was against his son s choice for a wife and gave the young couple his blessing shortly before his death.